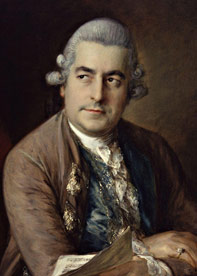 Johann Christian Bach (1735 - 1782), the youngest son of Johann Sebastian Bach four sons, was born in 1735 in Leipzig. He was taught to play keyboard instruments and music theory by his father from an early age. But since his father died when Johann Christian was only fourteen, his instruction in composition and keyboard instruments was continued by his elder half-brother Carl Philipp Emanuel in Berlin.

In 1755, Johann Christian traveled to Italy, where he found an influential patron in Count Agostino Litta, who introduced him to for example his teacher Padre Martini. Staying in Milan until 1762, he also traveled in this period to further his education, including to visit Padre Martini in Bologna. His Italian phase was dominated by the composition of Latin church music. In addition, he converted to Catholicism, presumably to raise his chances of a permanent position, although this severely strained his relationship with Carl Philipp Emanuel. In 1760 he was made Deputy Organist at Milan Cathedral and in 1761 appointed Kapellmeister at the Church of Santa Maria di Caravaggio. While in Italy, alongside sacred music, he also turned his hand to the opera, which became one of his most important genres. He soon began writing arias and overtures for other composers’ works and quickly acquired a reputation for his operatic work rather than his church music. Bach’s first opera Artasere debuted in 1760 in Turin, while his second and most famous opera Catone in Utica was first performed in 1761 in Naples.

In autumn 1762, Johann Christian Bach moved to London and was known as the ‘English Bach’. Having been commissioned to compose two operas for the King’s Theatre. Although he had only requested a one-year sabbatical from Milan Cathedral, in 1763 he decided not to return to Italy. True, his contract at the theatre wasn’t immediately renewed, but he still acquired a healthy reputation both as music tutor to Queen Charlotte (to whom he dedicated his Piano Concerto No. 1) and thanks to his involvement in London’s concert scene.

In 1765, J. C. Bach teamed up with his friend Karl Friedrich Abel to organize the »Bach-Abel Concerts«, which they conducted alternately, and at which they mainly performed their own compositions such as Bach’s symphonies. In addition, Bach staged benefit concerts for former musicians and their dependents. He also wrote a large number of songs for the open-air summer concerts at Vauxhall Gardens. In 1764 he began composing operas again for the King’s Theatre, but failed to build on his previous success. In 1772 and 1774, he was commissioned to write operas in the German city of Mannheim, where he proved more successful. Amadis de Gaule, his first French-language opera, was premiered in Paris in 1779. While staying in the French capital, he met Wolfgang Amadeus Mozart again; they had first become acquainted in London in 1765 and greatly respected each other. In the 1770s, Johann Christian Bach joined a Masonic lodge and married Cecilia Grassi, an Italian opera singer. Their marriage remained childless.

Although Bach’s music was popular in London, the status of the Bach-Abel Concerts waned. His fortunes declined when his steward embezzled most of his funds. In 1781, Johann Christian Bach became seriously ill, and he eventually died on 1 January 1782 in considerable debt in London.

The catalogue of Johann Christian Bach’s compositions was compiled by Ernest Warburton and published in 1999.