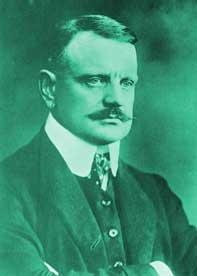 Finnish composer, Jean Sibelius was born in Hämeenlinna on December 8, 1865. After early training in Helsinki and later in Berlin, Sibelius made his career in Finland, where he was awarded a state pension. He wrote seven symphonies, an additional eighth, completed but destroyed.

The first two of these enjoy particular popularity. Finlandia (1899) is held in high regard while his Violin Concerto (Naxos 8.550329) now has a place in the standard solo violin repertoire.

Of interest to freemasons is his Musique Réligieuse Opus 113. Completed on the eve of Twelfth-Night, 1927, as late as 1946 Sibelius added the Praising Hymn and the Ode to Fraternity. These are the last compositions he published.

Opus 113, compassing the complete masonic ritual music for the three Craft degrees, is owned by Suomi Lodge No. 1, Helsinki, Finland, which he joined on August 18, 1922. Jean Sibelius died on September 20, 1957.