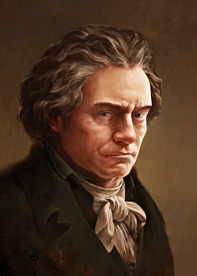 Although there is no definite masonic record for Ludwig van Beethoven, there are strong grounds for believing that he was a mason.

"Many of his friends and fellow musicians were masons and there are several references to Masonry in his voluminous correspondence. The Adagio of his Seventh quartet bears the superscription: 'A weeping willow or an acacia over the grave of my brother'.

Both Beethoven’s blood brothers were alive when this work was written and so these words probably had a masonic connection.

Schindler, one of his biographers, mentions a handshake when visiting the composer: '... a grip of our hands said the rest'. A song, 'What is the Mason’s aim', was written for the 'Loge des Frères Courageaux à l'Orient de Bonn' and was published in 1806.

"His presence at concerts given with full masonic rites is documented, and presumably, to have been allowed to attend he must have at least been initiated into the Brotherhood.

"Three of Beethoven’s biographers state that he was a mason, but none of them give any further information. However during this period, Masonry was oppressed in Central Europe, and most Lodge records were either destroyed or not kept in the first place.