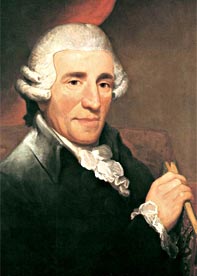 FRANZ JOSEPH HAYDN (1732 - 1809) was a great man, composer, and musician. He played expertly on the keyboard, violin, organ, and kettledrums. In 1784 a quartet in Vienna played some of his string quartets comprising: 1st violin, Haydn, 2nd violin, Leopold Mozart, viola, Wolfgang Mozart and ‘cello, Baron Ditters von Dittersdorff who was also a talented composer and Freemason. Surely the most talented quartet ever assembled!

He composed 104 symphonies, 20 keyboard concertos, 16 concertos for other instruments, 14 masses, 2 oratorios, numerous operas, 50 piano sonatas, 84 string quartets, 100 sonatas for baryton and many songs. He is rightly called the

“Father of the Symphony” originating the form used by Mozart and many others and also initiated the form of string quartet used thereafter by Mozart and Beethoven.

He was initiated in Vienna on February 11, 1785, in Lodge Zur Wahren Eintracht (True Concord) probably due to Mozart’s initiative. There is no evidence of his attendance in any lodge thereafter and some believe he took no further interest in freemasonry. Others, including myself, disagree. It should be understood that from the time of his initiation he spent all of his time in Esterhazy, some distance from Vienna, so he had difficulty in attending, and his lodge often noted him as ‘auf reisen’ (abroad), so it seems that he did submit his apologies. His lodge was closed down on December 24 of the same year. Also by 1797 Freemasonry was effectively banned in Austria, so it was a difficult time for the brethren, including Haydn.

Unlike Mozart, there is no existing Masonic music composed by him but some evidence exists that he wrote some. The Imperial Censor noted an entry “Lieder zum gebrauch der Loge Zur Wahren Eintracht” – Songs for the use of the Lodge. However, the Censor described them as “unbrauchbar”– useless - and they have never been found. It is a pity as this probably was a very good example of ‘gebrauchmusik’ which is music composed for a specific occasion, anniversary or celebration. It was often done in the 18th century and later, especially by Masonic composers. He composed an oratorio “The Creation” which some writers consider to have Masonic references. He also gave a great deal of support for Mozart’s widow and children. He was a true mason.

I would now like to talk about a Freemason who, arguably, can be described as the greatest musical genius of all time. He wrote over 600 works in his short life and there is evidence that several others have been lost, possibly due to the closure and amalgamation of some lodges by Imperial decree. He was a virtuoso of the harpsichord, organ, violin, and viola. His bibliography is probably the largest written on any musical subject comprising numerous books and research papers. (I plead guilty to writing some of them). His works are frequently performed worldwide.